Fans wait in cold for seats in the Izzone 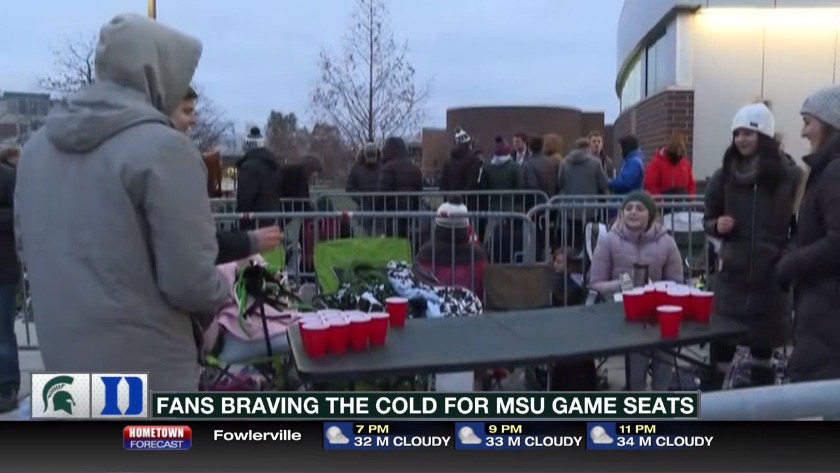 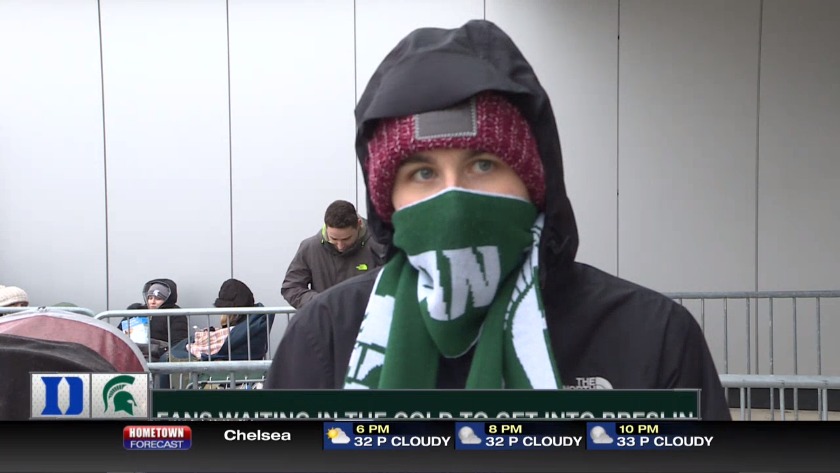 Fans waiting in the cold to get into Breslin

EAST LANSING, MI. (WILX) -- Michigan State and Duke won't tip off at the Breslin Center until 9:30 on Tuesday night, but fans have been waiting out in the cold all day to get the best seat in the house.

Michigan State and Duke won't tip off at the Breslin Center until 9:30 on Tuesday night, but fans have been waiting out in the cold all day to get the best seat in the house. (Source WILX)

NEWS 10's Kylie Kahn was at the venue and tells us that it hasn't warmed up much since 8 a.m. but that the fans' energy is heating up as game time gets closer.

One fan told Kahn that he's been waiting since the morning.

Fans were standing outside for more than 12 hours in 30 degree weather, and have proven that the weather won't stop them from supporting their team. Some are dressed in their MSU hats, scarves and gloves.

Jake Oyster, a senior from MSU, said, "We're not fair weather fans. We're ready to sit it out and get great seats for this."

Nick Franz, a MSU sophomore added, "It's what we do in East Lansing. We love our sports so we've got to get the best seats."

Kahn noticed that some of the students in line had pillows, blankets, food and even homework with them.

Before coming out Tuesday morning, many of these people didn't know each other but they became friends very quickly in line.

"Just hanging out, playing games, cards and what not, it's been a lot of fun," MSU senior Alex Gross said. "Hope tonight doesn't get too much colder out, but trying to pass the time as much as possible."

Many students gave up their entire day to make sure they got a spot in the lower Izzone.

The line full of die-hard fans whose love of basketball brought them together on a cold day, all hoping that the match up against Duke is worth the wait.

"The history, two all-time great programs," said sophomore Evan Victor. "It's a great rivalry and it's something that I want to be a part of."

Tip off is at 9:30 and a halftime ceremony is dedicated to the retirement of Draymond Green's jersey.

Purdue defense bottles up No. 8 Spartans in 71-42 upset

Purdue defense bottles up No. 8 Spartans in 71-42 upset