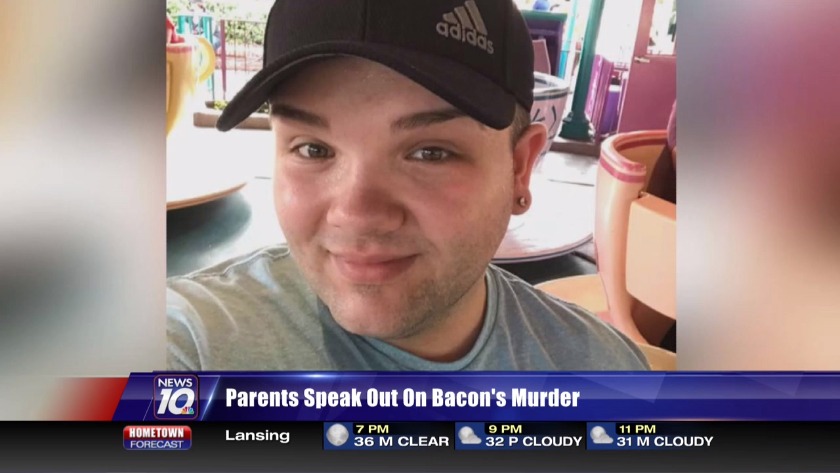 Parents speak out on Bacon's murder 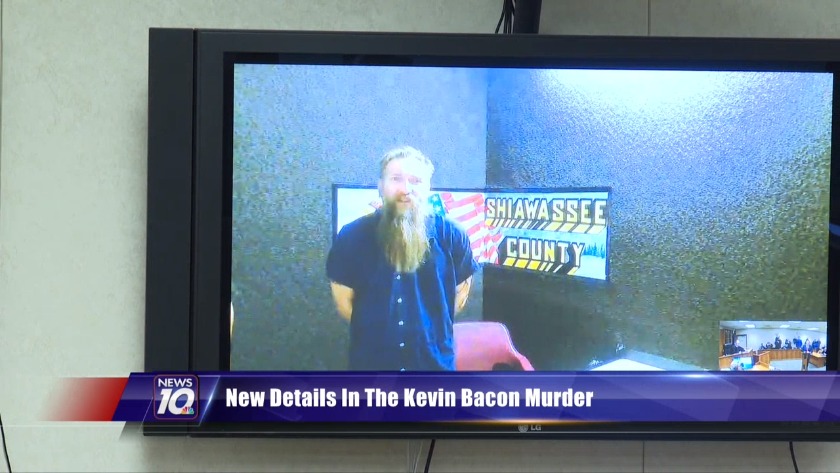 SHIAWASSEE COUNTY, MI (WILX) -- A man accused of killing a 25-year-old Swartz Creek man is planning to plead insanity, according to his attorney, and will be back in court on Wednesday.

On Monday, court documents revealed what police found on December 28, the day they arrested 50-year-old Mark Latunski in connection with Kevin Bacon's death.

Warning, the details of the testimony are graphic.

Detectives said they went to Latunski's home to perform a welfare check as that was the last location Bacon was believed to have been.

According to testimony from the detective, Latunski confessed to killing Bacon by stabbing him with a knife in the back one time then slitting his throat.

He also admitted to police he wrapped a rope around Bacon’s ankles and hung him from the rafters on the ceiling.

According to the documents, Latunski admitted he used the knife to cut off Bacon's testicles and consumed them.

Derek Park, who lives nearby, was disturbed by this detail.

"Now that part's disturbing, that's nasty. He's a little nuts, like he knew what was happening and he just (said) 'hey, yeah come on in, take a look around' like there's nothing wrong," Park said.

Bacon's parents said they hope their son's tragic story will help others as new details have been released about what happened to him the day he was found dead.

"He obviously got into something he wasn't prepared for. We all make mistakes. It's gutwrenching to hear the details and we're just beside ourselves," said Bacon's dad, Karl Bacon. "What was released today shows Kevin had a dark side. For those who knew and loved Kevin did not know that side. Those who knew him knew his good side. He loved and cherished everyone he touched and he touched a lot of lives in the past. During his short life," his father said.

Latunski was charged with one count of open murder and one count of mutilation of a human body. He was arrested that Saturday after police searched his home.

Bacon was first reported missing on Christmas Day when he didn't return home for a family breakfast.

Friends and family mounted a large search effort for Bacon. His car was found in Clayton Township near his home. His wallet, phone and other belongings were inside.

Latunski's home is located about 23 miles from where Bacon lives.

Neighbors of Latunski said people are shaken that something like this could happen in their small community of Morrice.

"You hear a lot of rumors, what was done and this and that and you think 'that couldn't happen, but now we're finding out it did happen," Art Turner, Latunksi's neighbor said. "I can't even imagine anybody doing something like that."

Morrice is a quiet village made up of mostly farmers with a population of around 900 people according to the census. It is made up a total area of 1.38 square miles.

"We're all just farmers and deer hunters, so it's quiet," Michael Parks, a Morrice resident, said. "We moved from Atlanta and I thought we were going to get away from the crowds and all this kind of stuff, but I guess you never know who your neighbors are."

Parks said he has seen odd behavior from Latunski previously. On Nov. 25, police responded to Latunski's home when a 29-year-old man wearing nothing but a leather kilt ran from the house with Latunski chasing him. Parks said the man had blood on his face and was screaming for help.

Police investigated the incident but the man didn't want to press charges and police determined no crime had been committed.

Latunski told police that he was chasing the man because he was wearing his kilt, it was expensive and he wanted it returned.

Bacon's parents said they were overwhelmed by the support that came from the community.

"His dancing, his sassiness and his love for makeup and hair, and how good of a stylist he was. I'm just going to love everything about him, I'm going to miss him," Wendi Walters, who knew Bacon, said at the vigil.

Bacon's parents say they hope hearing what happened helps others not make the same mistake.

"When you use these apps just let other people know who you're meeting and where you're going to be at so you have a safety net behind you," said Karl.

Now they just want their son to be remembered for who he was.

Latunski was arraigned last Monday. However, in court, he told the judge that he was not Latunski.

"Sir, are you Mr. Latunski?" he was asked in court.

"No, my name is Edgar Thomas Hill. Mark Latunski is my nephew," he said.

He also signed another name on court documents.

Bacon's family says they believe it's part of his plan to get out of it.

"I think he's trying to throw us off," said Pam Bacon, Bacon's mother.

"He's trying to claim incompetent. He's done that in the past," Bacon's father said.

The judge continued on with proceedings and ordered Latunski to be held without bond.

"The police have definitely identified who he is. They've dealt with him in the past, and this is the same person they arrested on site and he has not left their custody at all," Karl said.

Latunski was charged with kidnapping in 2013 for allegedly taking two of his four children from their mother- his ex-wife.

Those previous charges were dismissed after several competency hearings.

This is a breaking news story. WILX News 10 is working to get more details on this story and will update the story as more information becomes available.