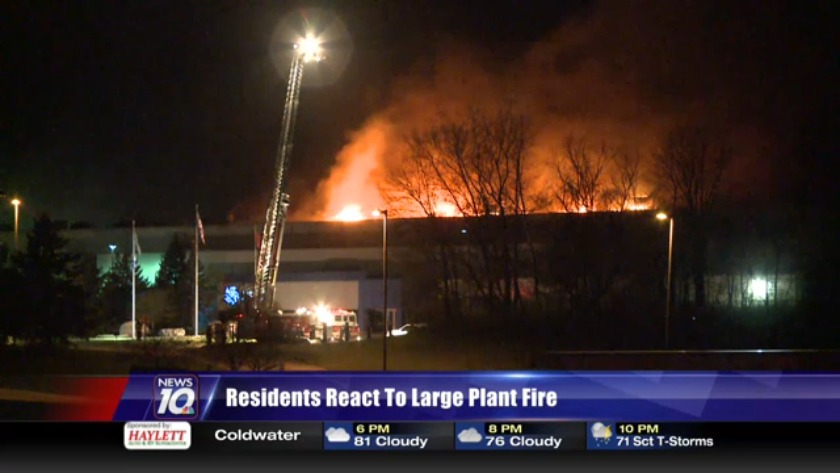 EATON RAPIDS, Mich. (WILX) -- There was a massive fire at the Meridian Magnesium Products of America plant Wednesday morning.

The plant is located on Industrial Drive in Eaton Rapids.

Officials at the Eaton Rapids Medical Center told News 10 that the facility has released the two patients that were injured from the fire.

Reports show that a combination of two plants were on fire. And, the explosion has melted down parts of buildings. The roof is completely gone and scraps of magnesium have been melted into bar form.

The south end of the plant is production for many auto parts; which could lead to an adverse affect on the auto industry. Dashboards for cars were produced at this plant.

Some of the clients that used this plant are automakers Ford, GM, BMW, Fiat and Daimler Chrysler.

Meridian Magnesium Products of America is listed online as the world's largest producer of magnesium components for automakers. Their headquarters are located in Plymouth, Michigan.

The product 'magnesium' is considered an innovative lightweight cast-metal solution.

The cause of the fire is under investigation.

Residents in the area told News 10 that they felt the blast, reports say, as far as two and a half miles away.

One resident from Onondaga, which is about 10 miles away from Eaton Rapids, contacted News 10 to say that he felt the explosion. Russ Bodell said he felt his house shake and the windows rattle. He told News 10 that he never heard anything like it and got goosebumps after the explosion.

This is a breaking news story. News 10 is working to get more details and will update the story as more information becomes available.
Stay with News 10 and WILX.com as we follow this situation. Refresh your page to make sure you are seeing the most current information.