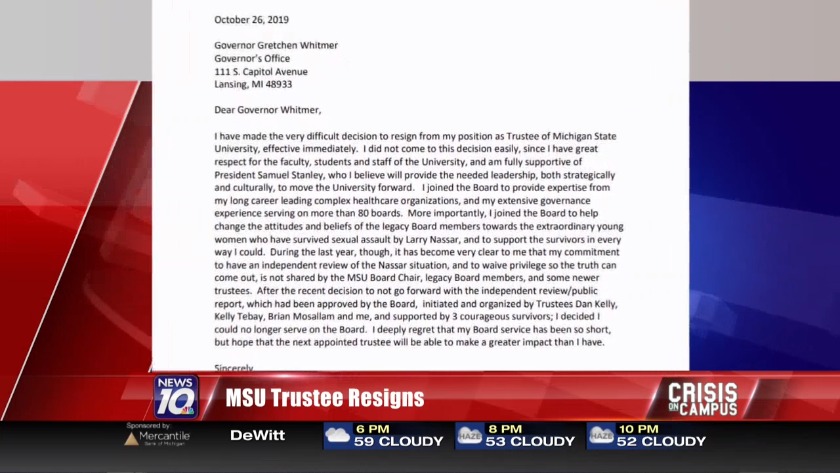 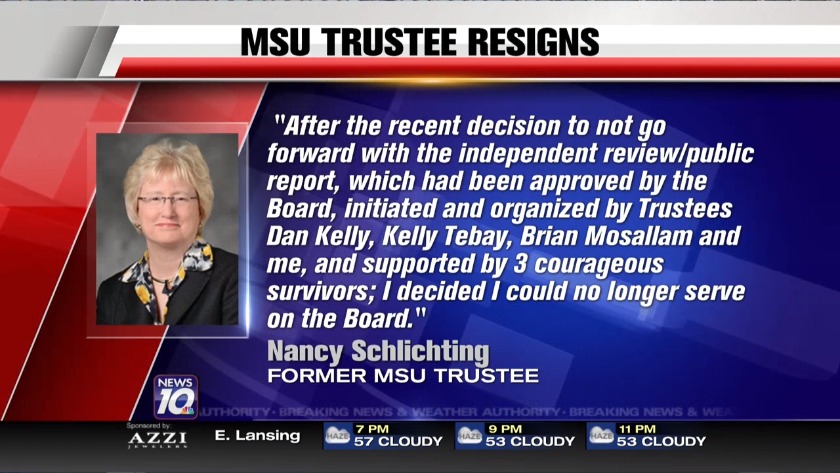 EAST LANSING, MI. (WILX) -- MSU Trustee Member, Nancy Schlichting, has turned in her letter of resignation from the board.

WILX spoke to Joel Ferguson who confirmed that in fact Schlichting was resigning, he had no further comment on why, but wished her well.

The Governor's office also confirmed that they have received a letter of resignation from Schlichting.

Schlichting said in the letter that she was resigning after a recent decision to not go forward with the independent review of MSU's handling of the Larry Nassar complaints.

She said, "After the recent decision to not go forward with the independent review/public report, which had been approved by the Board, initiated and organized by Trustees Dan Kelly, Kelly Tebay, Brian Mosallam and me, and supported by 3 courageous survivors; I decided I could no longer serve on the Board."

Governor Whitmer will have to appoint someone to fill Schlichting's shoes. They did not say how soon that would happen.

“Governor Whitmer is grateful to Trustee Schlichting for her service to the university," said a spokesperson for the Governor. "The governor takes her responsibility to appoint a new trustee very seriously. She is committed to appointing someone who will work together with President Stanley and the remaining board members to build a campus culture that respects diversity, listens to survivors, and makes a college education more affordable and accessible for Michigan families.”

According to her bio on Michigan State's website, Schlichting was appointed to the MSU Board of Trustees by Gov. Rick Snyder in December 2018 to complete the term vacated by George Perles, which ends Jan. 1, 2023.

Schlichting is a highly regarded expert and accomplished speaker on strategic leadership, quality, cultural transformation, community engagement, innovation and diversity, according to the site.

Reports say that she is citing unhappiness with the board due to the handling of the Nassar scandal.

You can read her letter to Governor Whitmer here:

I have made the very difficult decision to resign from my position as Trustee of Michigan State University, effective immediately. I did not come to this decision easily, since I have great respect for the faculty, students and staff of the University, and am fully supportive of President Samuel Stanley, who I believe will provide the needed leadership, both strategically and culturally, to move the University forward. I joined the Board to provide expertise from my long career leading complex healthcare organizations, and my extensive governance experience serving on more than 80 boards. More importantly, I joined the Board to help change the attitudes and beliefs of the legacy Board members towards the extraordinary young women who have survived sexual assault by Larry Nassar, and to support the survivors in every way I could. During the last year, though, it has become very clear to me that my commitment to have an independent review of the Nassar situation, and to waive privilege so the truth can come out, is not shared by the MSU Board Chair, legacy Board members, and some newer trustees. After the recent decision to not go forward with the independent review/public report, which had been approved by the Board, initiated and organized by Trustees Dan Kelly, Kelly Tebay, Brian Mosallam and me, and supported by 3 courageous survivors; I decided I could no longer serve on the Board. I deeply regret that my Board service has been so short, but hope that the next appointed trustee will be able to make a greater impact than I have.

Attorney General, Dana Nessel, released a statement on Schlichting's resignation. She said, "“I respect Trustee Schlichting’s decision to step down and I hope Gov. Whitmer appoints someone committed to transparency, which includes waiving privilege on the nearly 6,000 documents our department has yet to see so that we may complete our comprehensive investigation.”