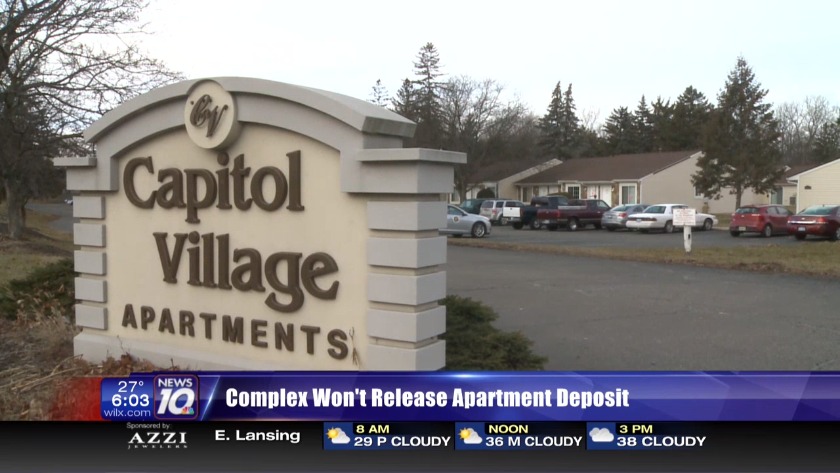 LANSING, MI. (WILX) -- Bergundy Atkinson signed up for a lease when Capitol Village was running a special; it only cost her $100.

Tenants at Capitol Village in Lansing are finding stickers on their doors and windows telling them they will have to move out by the end of the month. (Source: WILX)

And since she can't move in or get her money back, it's more than enough for her to be angry with the leasing office.

Atkinson tells News 10 she's been unable to find a place to live for a while, and Capitol Village was one of her only options.

"I can't believe the scam and deception...they had to know that this was going on."

When the apartments were pink-tagged last week, Atkinson says she was told to go in and get her money back.

"My money is not there, and they tell me 'we've deposited all the checks,'" she said.

Atkinson says they told her that she would have to wait two weeks to get her money back.

She's not buying it.

"I think they're trying to hold onto my money just in case they think they're going to get that all wrapped up," said Atkinson. "I'm no longer interested...I just want my money."

It’s money she says she needs but it's not the main thing she's concerned about.

"It's the principal. You already knew that you weren't allowed to rent out those apartments in the condition they were in, but you did it anyway" said Atkinson. "That's a deceptive practice right there. I wouldn't recommend that place to nobody."

News 10 called the leasing office at Capitol Village asking for a response. They said as of right now, they can't make a comment.

Atkinson told us she'll be letting the City of Lansing know about her problems with Capitol Village.

News 10 will keep you updated on the compliance issues and the possible criminal investigation into the removal of the pink tags.

Learn more about School of Choice at the Capitol
Related Stories