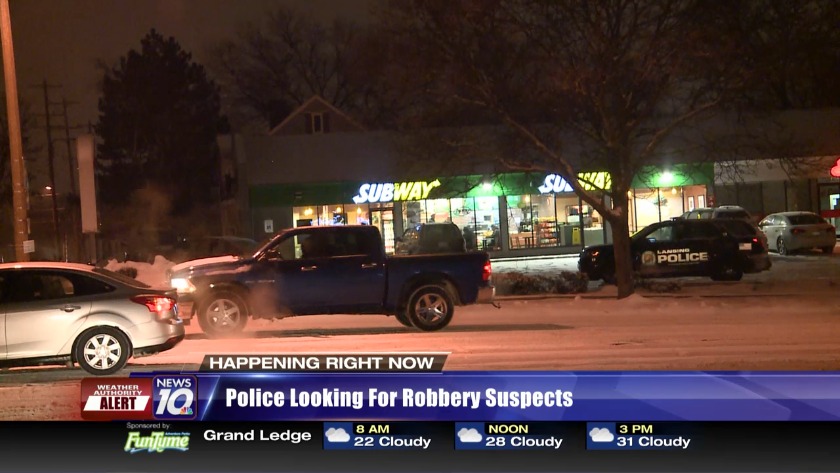 LANSING, Mich. (WILX) - Police have arrested one of the two suspects in the Feb. 10 armed robbery of a local Subway.

Dallas Dee Damon III, 28, of Lansing, was arrested on Feb. 11 on the west side of Lansing without incident.

Magistrate Millmore placed him with a $75,000 cash/surety bond.

The Subway that was hit on Feb. 10 was also robbed two weeks ago.

The robbers walked into the Subway near South Pennsylvania and Mt. Hope avenues around 7 p.m. on Feb. 10, a Lansing police sergeant told News 10.

LPD says one of the suspects went up to the counter with a gun and demanded money. The second suspect acted as the lookout.

The suspects were described as a white man, about 6 feet tall with a thin build and wearing an orange hooded sweatshirt, dark pants and gray running shoes (Dallas III); and a black man, who is described as wearing a gray sweatshirt, blue jeans and white tennis shoes. The other suspect is still at large.

No one was hurt in the robbery and the two suspects left on foot. A police K-9 unit was unsuccessful in tracking them down.

This is the second armed robbery in under two weeks at that Subway and the third robbery in three months. On Feb. 1, three young men walked into the restaurant with covered faces and demanded cash. One of them also had a gun. On Nov. 6 last year, a man walked in and grabbed cash from the register. No one was hurt in either robbery.

Damon III is due back in court on Feb. 21 for a probable cause hearing.

UPDATE: Lansing Police Department release video of Tuesday shooting
Related Stories
Comments are posted from viewers like you and do not always reflect the views of this station. powered by Disqus