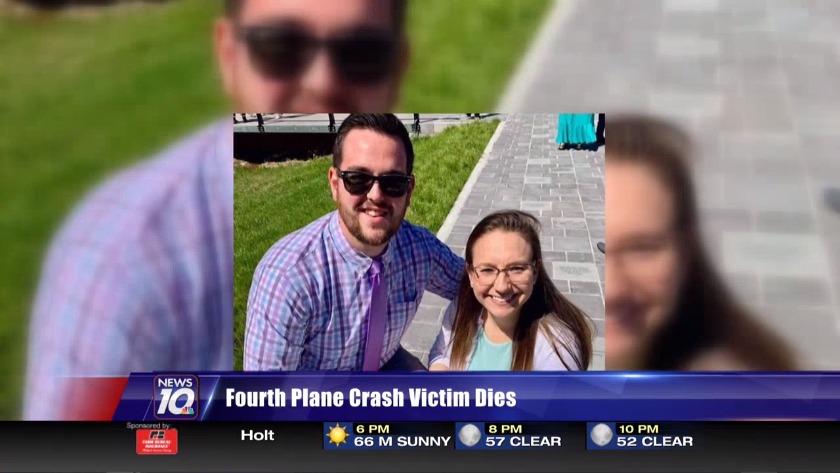 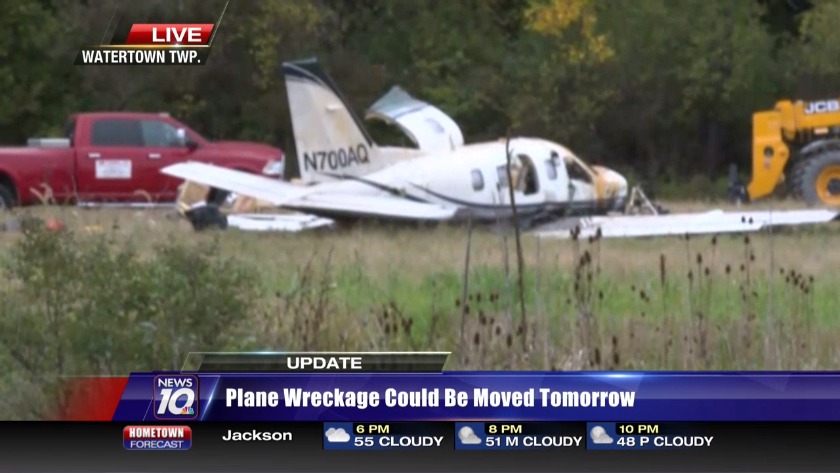 Plane wreckage could be moved tomorrow 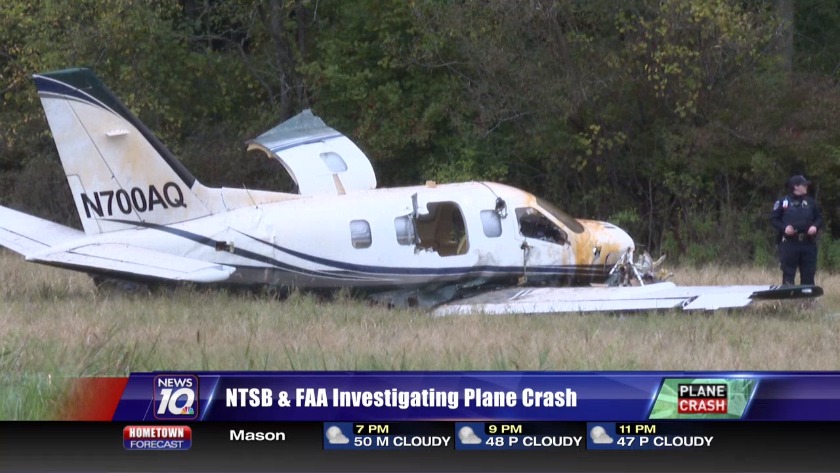 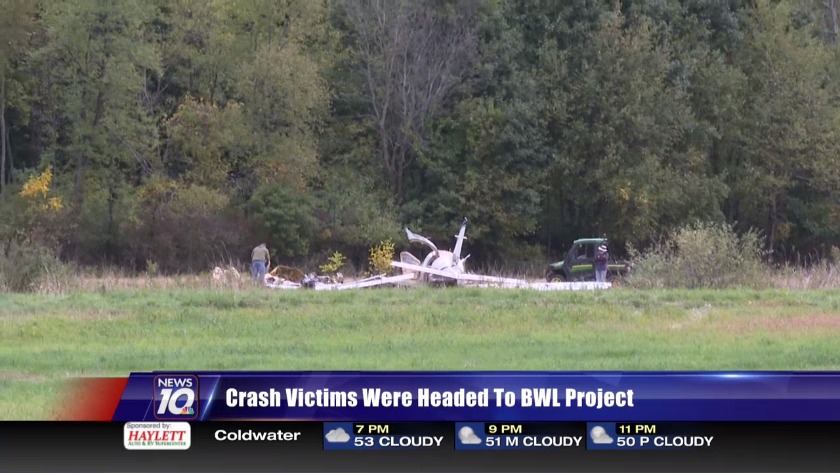 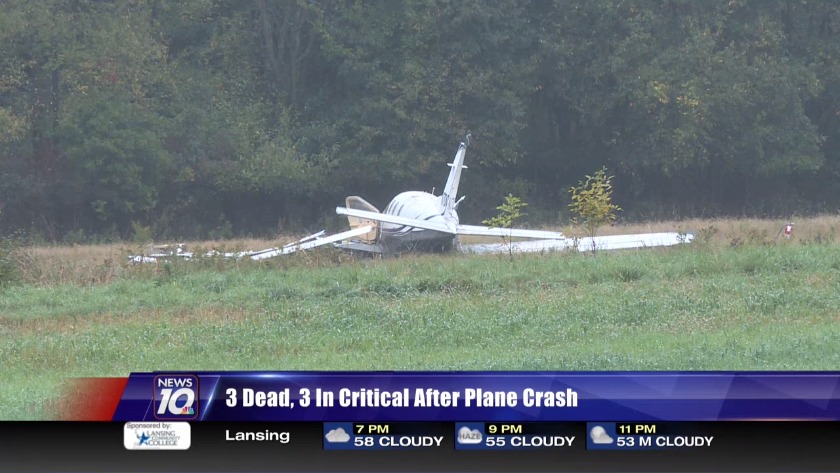 3 Dead, 3 In Critical After Plane Crash 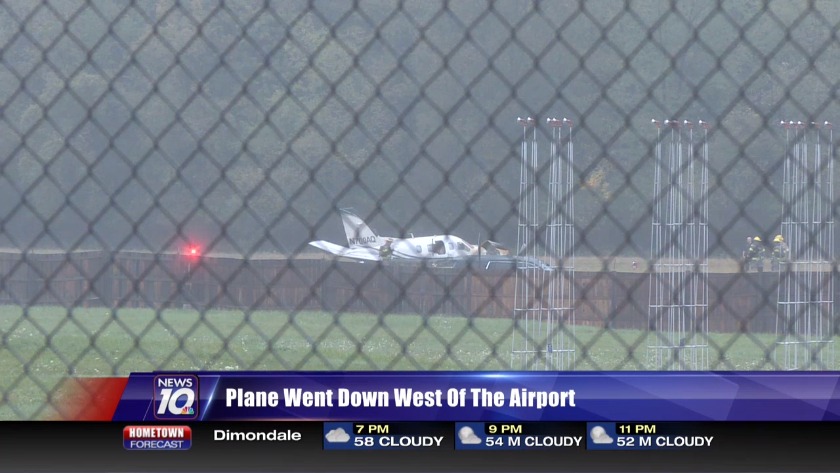 Plane went down west of the airport 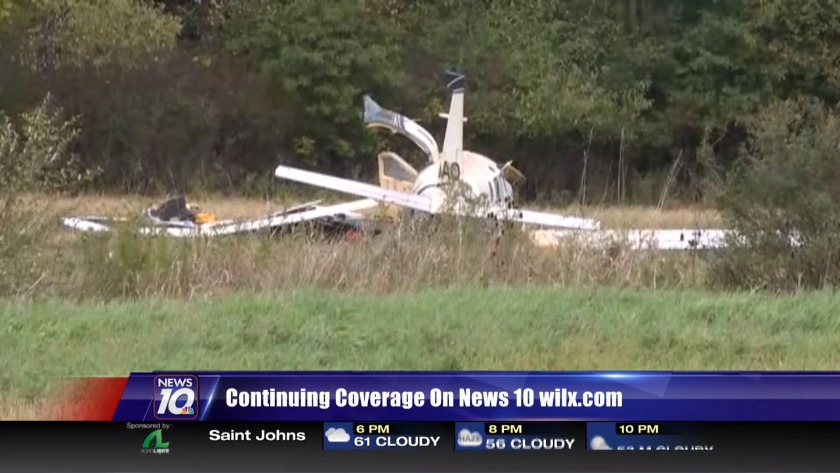 Plane was registered out of Indiana 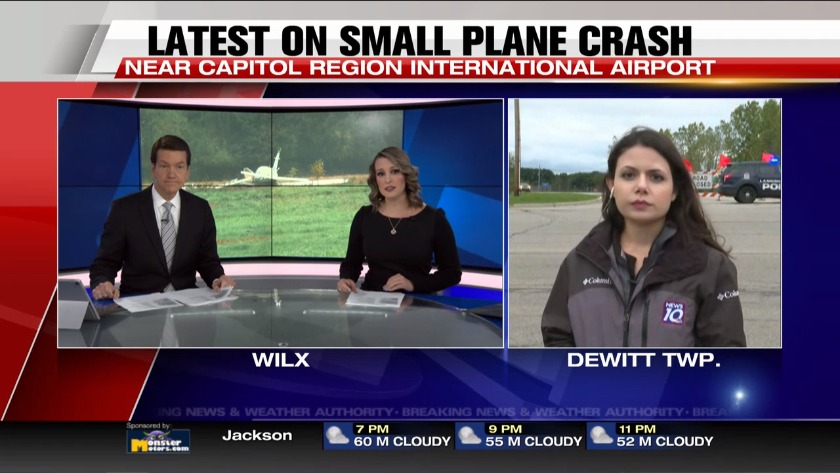 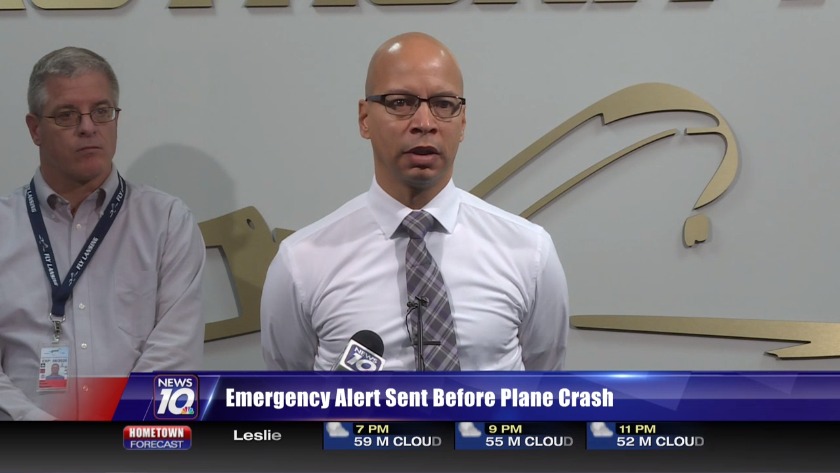 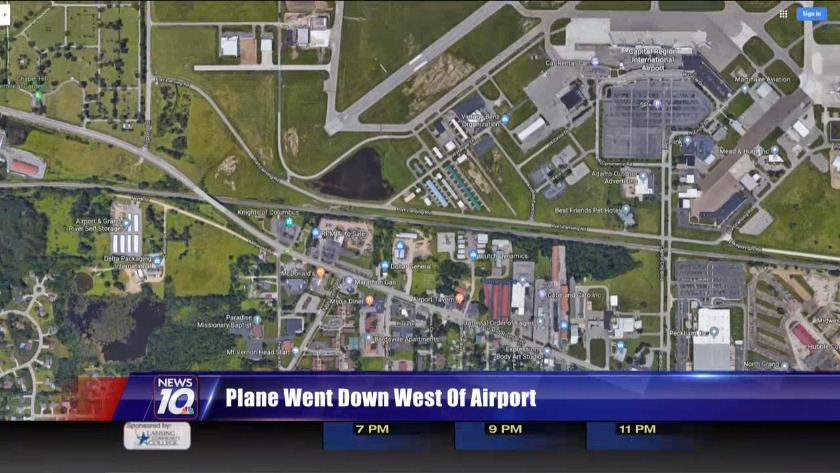 Three people have died in a plane crash in Lansing and three passengers are reported to be in critical condition at Sparrow Hospital. (Source WILX)

The 48-year-old pilot, Joel Beavins, died Sunday, according to his obituary posted online.

The National Transportation Safety Board released a preliminary report Wednesday on what caused the plane crash.

They say that there isn't a firm answer for what was behind the fatal crash but the plane was too heavy.

It noted that the plane was about 126 pounds over the maximum allowable landing weight when it crashed about 3 inches past the center-of-gravity limit.

Three people were dead on arrival after the plane went down, they were:
Neil Alan Sego, age 46 of Trafalgar, Indiana, John Thomas Lowe, age 51 of Greenwood, Indiana, and Timothy Joe Clark, age 67 of Franklin, Indiana.

Two men have died that were in the hospital after the wreck, Beavins, of Franklin, Indiana, and Zechariah Bennett.

The sole survivor, Aaron Levi Blackford, age 42 of Frankton, Indiana, had recently been upgraded to critical but stable condition at Sparrow Hospital.

Clark and Beavins are reported to have had commercial pilot licenses.

The passengers were traveling from Indianapolis to mid-Michigan to work on a construction project for the Lansing Board of Water and Light (BWL).

The crash happened around 9 a.m. on Oct. 3, near Capital Region International Airport in DeWitt Township.

News 10 talked with relatives of the two of the victims as they plan funerals and wait for answers.

Scott Sego, Neil Sego's brother said, "the last thing he posted on Facebook just before 8 o'clock in the morning on Thursday - he was sitting on the plane with Aaron and they have their headsets on and their seat belts on and he had a picture that said 'away we go business trip.'"

"He never met a stranger in his life. He could go anywhere, any place, any time and he would find somebody to talk to like he knew them for 100 years," Scottt Sego said.

Shelby Bennett, Zachariah's wife said her late husband was a man of God.

"He was an encourager. He was a supporter. He was a man of God. He loved Jesus with all of his heart and he was just a great, great man," Shelby Bennett said.

The general manager of BWL also spoke out on the crash.

"This tragic event - you know we have a lot of folks that are traveling to our plant and we always hope for safe arrival you know they get home safe too. Safety is paramount to us and we never take for granted getting to the job can have unfortunate ramifications," Dick Peffley, BWL general manager, said.

The wreckage from the plane crash was moved on Saturday, Oct. 5, at around 11 a.m.

PLANE GOES DOWN WEST OF AIRPORT

In a press conference, Clinton County Sheriff Larry Jerue said the plane had a pilot, co-pilot, and four passengers on board.

Spencer Flynn, airport spokesperson, said that the pilot was trying to land when it crashed west of Airport Road.

YOU CAN WATCH THE PRESS CONFERENCE ON THE CRASH HERE

Emergency personnel were on the scene, including Clinton County and Lansing Fire for mutual aid.

Flynn said that they don't yet know the cause of the crash.

“No details on that. I know that it was coming in on the approach and that’s when something went wrong.”

It crashed 125 yards off Airport Road, which is technically not airport property, officials said in the press conference held after the crash.

"Aircraft accidents are very complex and will involve many agencies to conclude the investigation," Capital Region International Airport said in a statement.

They added, "we ask for your patience as we continue to navigate this crisis, attend to those injured, accommodate and inform families and protect the public."

Sheriff Jerue said it could take days to be investigated.

Witnesses told NEWS 10 they were shocked by what happened.

One employee heading into work at a nearby business saw the wreckage of the plane.

He said he tried to get his fire extinguisher loose from his car to go help but couldn't and decided to get out of the way of the emergency crews.

Bob Hull from Service Tech at Stay Dry Waterproofing added that he doesn't remember ever seeing anything like this.

"It was smoking out of the engine compartment, and I saw the police officer open the emergency escape hatch and throw it to the side....that's when I left," said Hull.

An owner of Jerry's Hairport saw multiple firetrucks, police cars, and ambulances drive by, so he went to check it out for himself.

"I was surprised. I actually got in my truck and drove down there and everything was blocked off," said Pat Zopf. "And then I called my wife and she was listening to the police scanners and they said there was a plane that had crashed."

He's worked near the airport for more than two decades and added that a crash was the last thing he expected to see.

"Twenty-three years and I have never experienced anything like this," Zopf said. "This is the first time I have ever heard of a plane crash here."

PLANE WAS TRAVELING FROM INDIANAPOLIS

Officials said the TBM-700 aircraft was leased and traveling in from Indianapolis.

Tim Horth, president and owner of Indianapolis-based Patterson Horth Inc., a general contractor, said Thursday afternoon, an employee from his business was on the plane.

Zechariah Bennett was a general contractor with Patterson-Horth.

Horth told NEWS 10 that Bennett was “a valued employee” who always had a positive attitude.

Horth said three employees from another company partnering with his business for a construction project in Lansing were also on the plane. Two are deceased, Horth said.

Horth said the plane departed from Indy South Greenwood Airport in Greenwood, Ind., for a flight to Lansing’s airport. Greenwood is about 25 miles south of Indianapolis.

On Friday, Dick Peffley, GM of BWL, released a statement about the crash:

"On behalf of the entire workforce at the Lansing Board of Water & Light, I extend my most sincere condolences to the victims and families of those involved in Thursday’s plane crash. While no BWL employees were onboard, the Patterson Horth team was flying to Lansing in their role as a contractor for the BWL’s new Delta Energy Park to meet with BWL personnel. I know this is a difficult time for those BWL employees who worked with their team, and grief services are being made available.”

"They are part of a large team where the rest of the workers will step up and help out here," Peffley said. "Our primary concern is to make sure that their friends and family know that we are sorry for their loss."

Chief of Public Safety for Capital Area Airport Authority, Eric Patrick, said that the tower did receive an emergency alert from the plane. He couldn't say if it came before or after the impact.

"The airport operations center was notified that there was an ELT, an alert from the aircraft," said Patrick. "I'm not sure if that was pre-impact or post-impact, but we received a notice from the tower that the aircraft was sending them an emergency signal."

"The wings are still attached, the propeller is there. Obviously it appears to be a hard impact but there was no fire on board, the aircraft did not disintegrate."

NO SERVICE AT AIRPORT WAS INTERRUPTED

Spencer Flynn said, "Currently the runway is still open and the airport is still open. Sadly, we have the kind of infrastructure to absorb incidents like this and continue our air service."

Karissa Weight, Director of Talent and Engagement for the CRAA, said that none of the commercial services at the airport were impacted by weather, and that airport services were not interrupted.

Ingham County sent out an alert that Airport Road between State Road and Port Lansing was closed around 9:00 a.m., those roads did not reopen until Friday afternoon.

As far as any other fatal crashes historically at the airport, officials said there was a hard landing a few years ago with a privately owned aircraft and people did get hurt, but this is the first deadly crash in the Lansing area in more than 25 years.

Looking through the history of accidents at Capital Airport, all the way back to the 1920s, we found this is the worst crash since 1962.

There have been at least three deadly crashes in the area since the National Transportation Safety Board started tracking them, and the last was in 1993.

Two people died when their plane had mechanical difficulties and crashed into trees at the airport.

In 1990, one person died when the pilot was unable to maintain control of the Piper Plane as he flew into the clouds.

Another person died in 1982 but investigators never figured out what caused that crash.

Witnesses say that plane appeared to nose dive into the ground, with no signs of flames or smoke before it went down.

Back in August, two people died when the four-passenger Aero Commander Plane they were in, crashed in Howell, near the Livingston County Airport.

That plane crashed during takeoff.