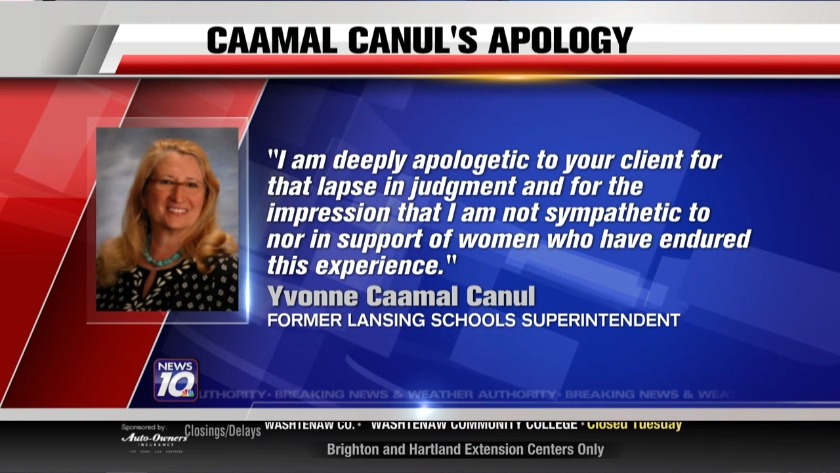 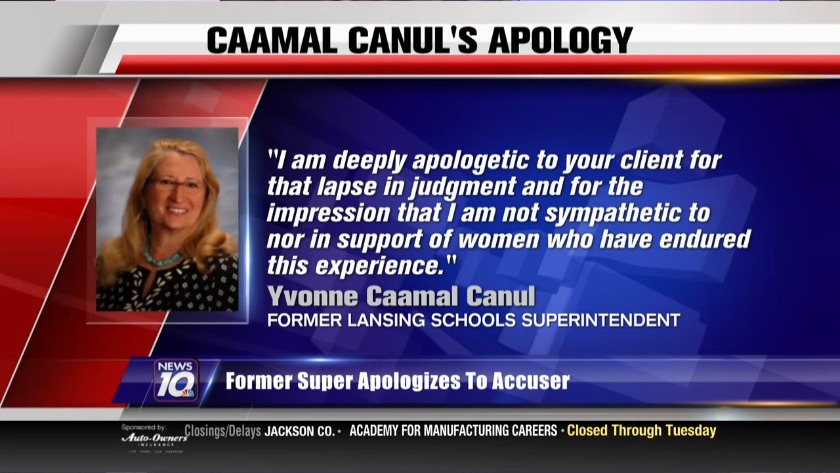 LANSING, MI (WILX) -- The former superintendent of Lansing Schools has apologized for comments she made about an accuser of the new acting superintendent.

Yvonne Caamal Canul had said Casey Sterle was "troubled" and seeking her "fifteen minutes of fame" after she came forward with allegations of sexual harassment.

Caamal Canul's comments were not well received with many parents expressing their outrage at the board meeting last week.

On Monday, Sterle's attorney told News 10 it's a small step in the right direction for Lansing Schools.

"Culture change starts from the top," Grewal Law Attorney Kelly McClintock said. "So by the superintendent reaching out and extending that olive branch...as I said, it's a step in the right direction."

In the letter obtained by News 10, Caamal Canul said the following to McClintock:

"You have requested that I apologize to your client for wording I used to describe her possible motivation for bringing an accusation against Dr. Mark Coscarella for an incident that allegedly occurred nearly 20 years ago.

Having been personally subjected to inappropriate, sexually-charged behavior during my lifetime as a woman, I certainly should have used better wording than “troubled,” or other quoted phraseology, regardless of the context in which it was subsequently used. I am deeply apologetic to your client for that lapse in judgment and for the impression that I am not sympathetic to nor in support of women who have endured this experience.”

McClintock hopes the situation will prompt people to believe survivors, rather than casting judgment.

"We should take a step back and look because that is how we honor survivors of sexual assault. That is how we as communities make sure that predators don't remain in positions of authority after they have offended."

On Sunday, Lansing School Board President Rachel Willis posted that the statements made by the Camaal Canul "are not representative of the sentiment of the board" and she "appreciates that she recognizes that and has issued an apology."

She goes on to say that Coscarella was removed from the Title IX Coordinator position, and they take the allegations seriously.

McClintock is hoping Lansing Schools will instill new protocols for handling situations like this, and make the right decision.

"I hope that they find a rockstar replacement as superintendent...I don't think that Dr. Coscarella is that person--I don't think our client does either. I just ask that people continue to believe survivors, hold our elected officials accountable, and to prioritize children and school safety," she said.

The Board of Education is continuing the search for the next superintendent with the help of an independent firm. They also are including input sessions and open interviews.

There is another community input session scheduled for tomorrow at 6:30 at the Wainwright Conference room located at 4200 Wainwright Avenue. We will be there and bring you the latest