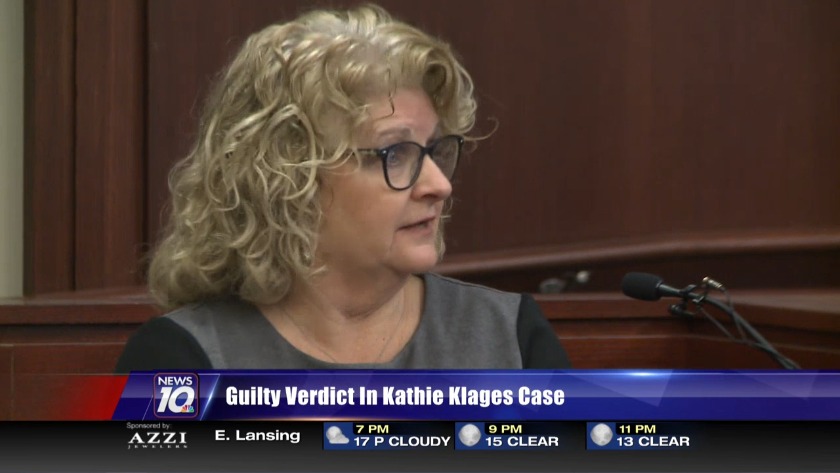 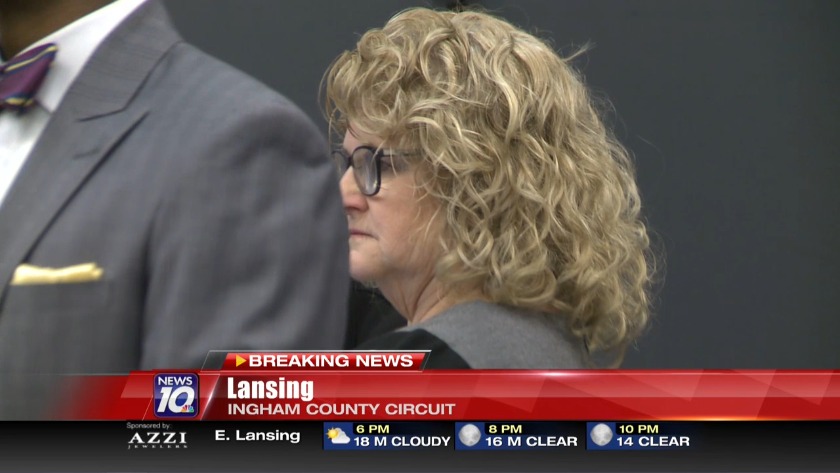 LANSING, MI (WILX) - Former MSU gymnastics coach Kathy Klages has been found guilty on both counts of lying to a peace officer and misconduct in office during the Larry Nassar investigation.

Klages was in tears after the guilty verdict was read, however, one of Nassar's survivors said they are relieved.

"Our goal is so that this doesn't happen again. This can be prevented. So I just feel like justice has been served," Danielle Moore said.

Friday marked day three of the Kathie Klages trial, and the day that the former MSU gymnastics coach took the stand.

Klages was accused of lying to police in 2018.

She testified Friday that she had “no recollection” of a conversation in which two teen athletes allegedly told her of sexual abuse by sports doctor Larry Nassar in 1997, nearly 20 years before he was charged.

“I have no recollection of the conversation,” Klages testified.

Klages told the jury that she started Spartan Youth Gymnastics in the early 90's. She said that the group wasn't competitive like Twistars and her role with them ended in 2000.

Klages said she didn't even remember Larissa Boyce or hearing a claim from her about any abuse from Larry Nassar.

Larissa Boyce testified that when she was 16 and training with the Spartan Youth Gymnastics team in 1997, she told Klages about Nassar — long before the scandal emerged in 2016.

But she said she backed off and even apologized after Klages warned her that any complaints about Nassar could cause trouble.

Klages did admit to knowing the anonymous woman because she was on her daughter's gymnastics squad.

She added that she met Nassar in 1988 and developed a professional friendship.

When the Indy Star article broke about Nassar's abuse, Klages said on the stand that she defended Nassar to her gymnasts. She told the jury that she cried when she read the article. But she also asked her athletes to sign a card in support for Nassar.

She told the court that she does not have any memory issues.

She faces up to four years in prison. She is the second person other than Nassar to go to trial on charges related to his serial molestation of young women and girls under the guise of medical treatment. Klages resigned in 2017 after she was suspended for defending the since-imprisoned Nassar.

In closing statements, the prosecution said Klages lied in 2018 when she told investigators that the two young athletes, who were in a campus gymnastics program but not Michigan State gymnasts, had not reported Nassar’s sexual misconduct to her.

“It’s not believable that the defendant forgot about being told ... what happened to them,” said Assistant Attorney General Bill Rolstin.

Defense attorney Mary Chartier urged jurors to not “rely on the word of two teenage girls from 23 years ago” and noted that Klages sent her children and a granddaughter to be treated by Nassar for years after she was allegedly told of his abuse.

On Thursday, the prosecution rested their case against the former MSU Gymnastics Coach.

The defense team had witnesses on the stand that included two of Kathie's children that were in gymnastics.

Earlier in the trial, on Tuesday, Larrisa Boyce and another woman who wished to remain anonymous, testified that they told Kathie Klages they were sexually abused by Nassar in 1997 during the time they participated in Spartan Youth Gymnastics.

Raven Slaght, one of the daughter's of Klages, took the stand for the defense. She said that she knows the anonymous woman.

"We were friendly when we were in club together, " she said. "She very kindly reached out to me when my son was born and sick. Acquaintances more so," she added.

Slaght said she even heard from the woman as recently as 2015.

"It was via Facebook, She just reached out because she had been in my shoes, (she) had a child that was needing some oxygen help and was actually really helpful and supportive."

"I didn't know much about life other than training to be an Olympic gymnast," Matthew Klages said. "I was ready to go out and have fun with my friends and be a normal teenager."

Both said they knew Nassar while growing up and even were his patients in the 2000s.

The prosecution asked Slaght, "In the interaction you've had with Dr. Nassar, it was nothing inappropriate, would you agree?"

Also taking the stand on Thursday was MSU Associate Athletic Director Rick Atkinson. He was the MSU men's gymnastics coach from 1989 until the program ended in 2001.

He ran the Spartan Youth Gymnastics program with Kathie Klages.

Atkinson testified Kathie Klages didn't interact with many of the youth participants.

Atkinson told jurors he didn't meet with youth participants in his office and he would be surprised if Kathie Klages did.

He also said Nassar didn't work directly with the group.

"If it was a major injury, we'd call an ambulance. If it wasn't we either excused them and tell them to see their personal physicians or have them work through it I guess. But we didn't have any personnel at all," Atkinson said in court.

Follow along with News 10's Cody Butler during the trial here:

Closing arguments are expected today in Kathie Klages’ trial. She’s accused of lying to police about when she knew about Larry Nassar’s abuse. #klagestrial @wilxTV pic.twitter.com/7SNusZmYBS

In August, Nassar’s former supervisor at Michigan State, ex-College of Osteopathic Medicine Dean William Strampel, was sentenced to jail for crimes including neglecting a duty to enforce protocols on Nassar after a patient complained about sexual contact in 2014. Former Michigan State President Lou Anna Simon has been ordered to trial on charges of lying to police, but it is unclear when the trial may begin.