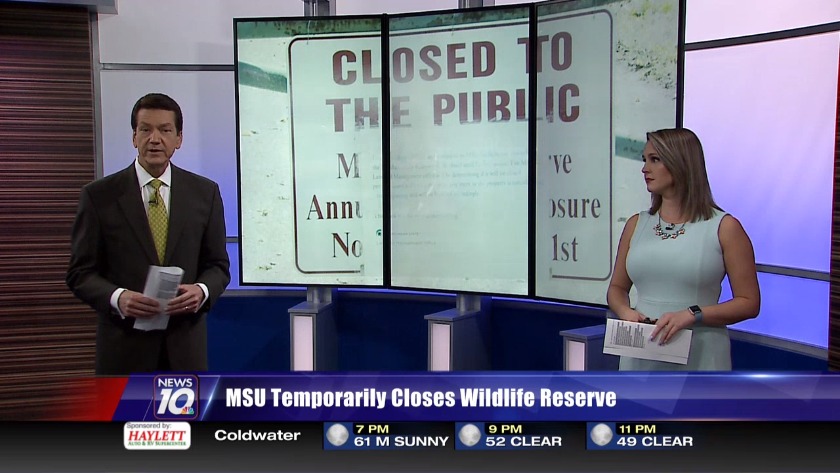 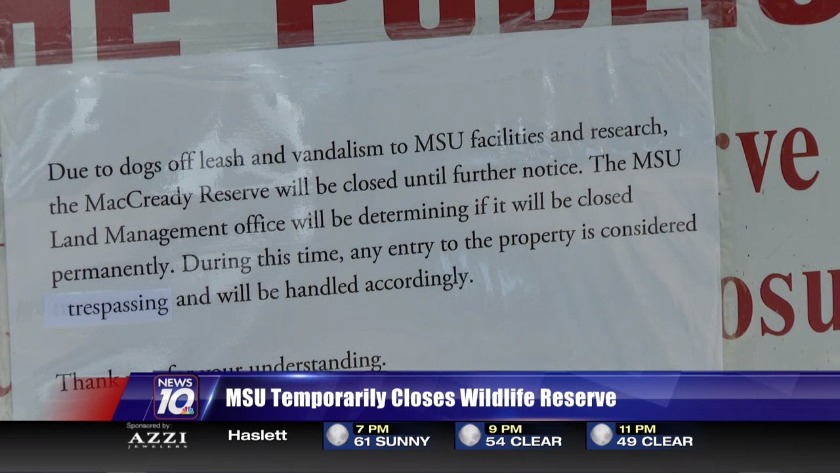 The MacCready Reserve is a popular destination on the outskirts of Jackson for anything from hiking, running, biking and even walking your dog. That's why people say they were frustrated when they saw the sign. They don't think the actions of a few should have consequences for everyone else.

The reserve is made up of 408-acres of wildlife and forestry, rolling terrain, natural springs and 6.5 miles of trails.

"The first time we got back way into the trials it just felt like a little piece of paradise," Gail Keagle, a hiker at the reserve, said.

Ed and Gail Keagle have hiked at the MacCready Reserve since it opened to the public back in 2008 so they were pretty disappointed to see the sign when they got to the park for their morning stroll over the weekend.

"It's such a beautiful place and it's something a lot of people use. There was a huge response on Facebook too, disappointment, anger," Ed said.

Michigan State University's Land Management Office closed the park because of vandalism and dogs roaming the grounds without leashes. It says the vandalism's directly impacted an ongoing research project.

"Down there that's the priority, teaching, and research. We choose to open the land because it's such a unique resource in the community as far as the hiking and walking trails, but recently we had a --one of our recent research projects had some vandalism as far as a bunch of time and labor was spent marking some area and those markings were all pulled out and removed by somebody," Chuck Reid, director of the land management office, said.

Reid said it's a temporary closure until they finish the research project, but even that is frustrating to the Keagles because the land was donated to Michigan State for the public and educational use.

"What should be kept in mind is the MacCready Family really wanted this for future generations to enjoy and I don't think that should be taken away for a few people that haven't done right," Ed said.

Michigan State's Land Management Office said because the reserve is a teaching and research facility there could be more closures in the future if the rules continue to be broken.

They're looking into a number of factors including working with the public to monitor the lands and say they hope the park can be opened to the public in two to three weeks.

Michigan State isn't saying if police or volunteers will monitor the reserve while it's closed.

The Keagles are hoping to schedule a meeting with the university to talk about the vandalism problems.

UPDATE: Jackson man sentenced for CSC where prosecutors say he strangled and duct-taped the victim

UPDATE: Jackson man sentenced for CSC where prosecutors say he strangled and duct-taped the victim