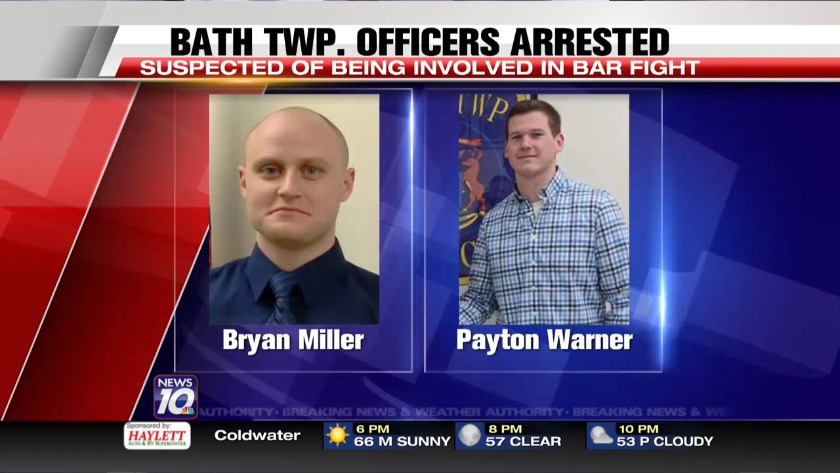 GRAND RAPIDS, MI. (WILX) -- Two Bath Township police officers are under investigation by their own department after a bar fight that happened on the west side of the state.

The two officers are under investigation by their own department after a bar fight that happened on the west side of the state (Source: Kent County Public Records Bank).

Officer Bryan Miller and Officer Payton Warner were arrested early on October 9 for taking part in the bar fight.

Surveillance video showed the altercation that took place at 'The Web' bar around 1:30 in the morning.

The bar is in Grand Rapids on Richmond Street.

NEWS 10 talked to the bar owner who has released the surveillance video.

Deb Owen said the officers punched a bartender and kicked a customer before the fight got broken up.

She said that Officer Miller threw the first punch.

"They came in and were drinking and were fine and they left," Owen said. "They went to another bar and came back with a couple of girls."

Owen's son works at the bar as a bartender.

She said that her son refused to serve Miller.

"My son refused to serve him and he got a little belligerent...he asked him to leave and he didn't..he got more belligerent and he started swinging," Owen said.

"About five guys helped my son kick him to the curb out the back door...one of the other guys called the police....and the officers arrested them."

Owen added that her son was only doing his job.

"If you've had too much to drink we have to turn you away, which the police very well know because that's the law," she said.

He said, "People tend to make very poor decisions when they have too much alcohol...no one is immune...certainly a police officer is not immune to that."

Wittkowski says that alcohol was a factor but is not releasing any other details at this time.

The men were lodged at Kent County Jail but both have since been released.

Bath Township PD has also confirmed the arrest and said that the department is investigating the incident.

They have also released a statement regarding the incident on their Facebook page, which can be viewed below.